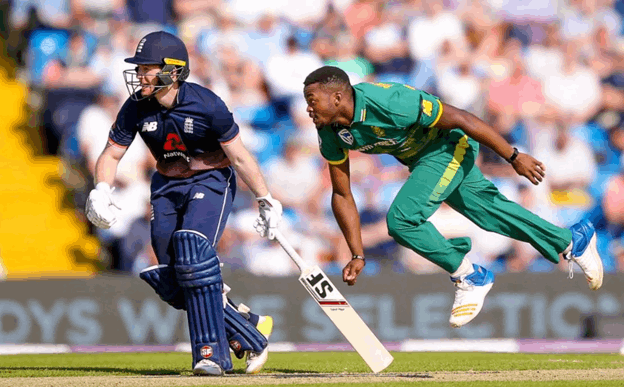 With a supreme nine-wicket triumph over South Africa in the third T20I at Cape Town, England made it to the top of the ICC T20I rankings, overtaking Australia. Chasing 192, England came home comfortably as Dawid Malan, the No.1 T20I batsman in the world, smashed an unbeaten 99.

Malan (99 not out of 47 balls) featured with Jos Buttler, who contributed an unbeaten 67 out of 46 balls, in a world-record second-wicket partnership of 167. As England swept the Proteas clean, winning the dead rubber in 17.4 overs, neither batsman looked to be in any trouble.

South Africa had earlier been competitive with the bat. Out of 32 balls, Rassie van der Dussen blasted an unbeaten 74 while Faf du Plessis was not out on 52 out of 37. The pair figured in the highest-ever fourth-wicket partnership of 127 in South Africa. The brilliance of Malan and Buttler, however, meant the stand was in vain.

Before de Kock fell to Jordan, South Africa added 34 for the opening wicket after winning the toss and deciding to bat first, miscuing one to mid-off.

During his 32s, Temba Bavuma looked decent but chipped Ben Stokes to mid-off to reverse all his hard work. With a slower ball, Stokes also dismissed Reeza Hendricks (13) to have South Africa reeling at 64-3 in the 10th over.

South Africa would have been assured of preventing a whitewash at the halfway point. After Jason Roy was trapped lbw by paceman Anrich Nortje for 16, expectations were boosted. If Malan and Buttler got their eyes inside, they were unstoppable.

On left-arm spinner Tabraiz Shamsi and pacer Lutho Sipamla, who conceded 57 and 45 in 4 and 2.4 overs respectively, the duo was especially harsh.