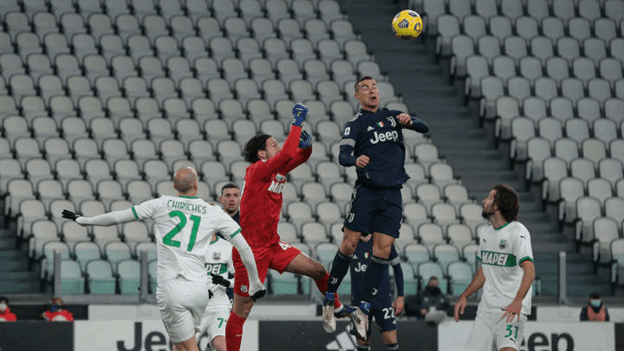 Cristiano Ronaldo, Portugal and Juventus superstar is commonly considered one of the world's fittest, if not the fittest, athletes - with the striker pays much attention to his diet and exercise to continue his career for years to come.

During Juventus' 3-1 victory over Sassuolo, Ronaldo's extreme commitment to fitness was once again on display as he pulled off a superhuman leap, jumping incredibly over Sunday's opposition goalkeeper, Andrea Consigli, in a gravity-defying moment.

Consigli, who leapt out with his palms, somehow couldn't beat Ronaldo with the forward 'floating' in the air, winning the aerial duel spectacularly. As usual, his leap had fans shocked at how the player would do it on social media.

The 35-year-old was his usual brilliant self this season in front of the Bianconeri post, netting 19 goals in just 17 game he played in all competitions with the club hoping to maintain this form as he is arguably the most critical player to go forward for them.