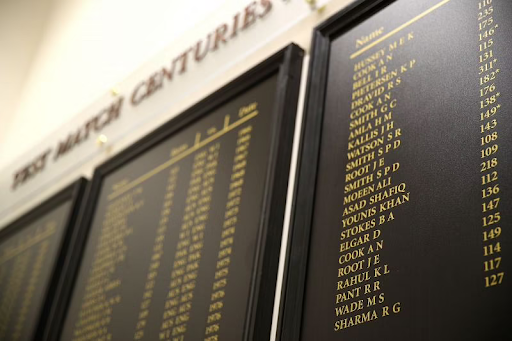 Following his stunning century in the second innings of the ongoing Test in London, Indian opener Rohit Sharma's name has been inscribed on 'The Oval' honours board.

On Saturday, Rohit Sharma finally got the monkey off his back by scoring his first Test century outside India.

The stylish Indian opener showed exceptional patience throughout his innings, yet he chose his hallmark stroke to bring up the landmark. The Indian opener danced his way down the track, depositing Moeen Ali in the long-on stands for his eighth Test victory.

Rohit Sharma has joined a select group of Indian batsmen who have struck a century at the legendary Kennington Oval, thanks to his stunning 256-ball 127.

Rohit Sharma has become the 9th Indian batsman to reach three figures at the historic stadium, joining Vijay Merchant, Rahul Dravid, Sunil Gavaskar, Ravi Shastri, KL Rahul, Kapil Dev, Rishabh Pant, and Anil Kumbleon on the list. Dravid has the record for being the only Indian batsman to score two hundred at The Oval.

Rohit's partnerships with Cheteshwar Pujara (61) and KL Rahul (46) meant India's 99-run deficit was erased, laying the groundwork for the rest of the batting to take their lead.

He was eventually removed for 127 when he miscued an attempted pull straight down Chris Woakes' throat at deep fine-leg after England took the second ball.

However, India's present 70-run stand between Shardul Thakur and Rishabh Pant is progressively pushing the team to a 300-plus lead in the fourth day's afternoon session.