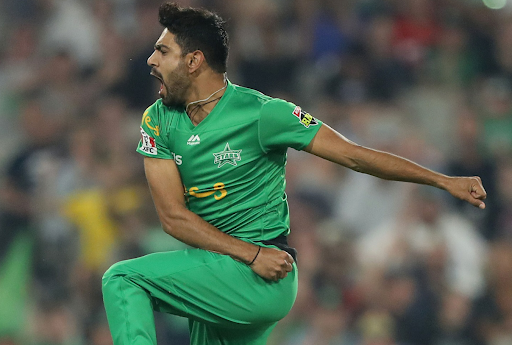 With Haris Rauf rejoining for another KFC BBL tournament, the injury-plagued Melbourne Stars have pulled off a big steal to improve their inexperienced pace assets.

After being picked by the Stars from the Lahore Qalandars in BBL|09, the then-uncapped Pakistani seamer stormed onto the world T20 scene.

During the 2019-20 season, the 28-year-old, who can reach speeds of over 150kph, claimed an incredible 20 wickets from ten matches, including a hat-trick that lit up a crowded MCG.

Before being called up to Pakistan's Test team in January 2021, Rauf returned for a three-game cameo in BBL|10, collecting a solitary wicket.

Rauf's performance with the Stars propelled him to national prominence, and he had his T20I debut for Pakistan in Lahore in January 2020, during the BBL|09 edition, before returning to Australia for the Big Bash finals, where the Stars were defeated by the Sydney Sixers.

Later that year, he made his ODI debut, and he recently played in all six of Pakistan's T20 World Cup matches, including the semi-final loss to eventual champions Australia.

After collecting 6-47 and 3-62 for Northern in Pakistan first-class cricket last week, the speedy right-armer comes into BBL|11 in fine form.

Rauf has paved the way for Syed Faridoun, who also arrived from the Lahore Qalanders, to make his Stars debut against the Sixers in the season opener.

He will make a great addition to a Stars bowling squad that was missing T20 World Cup veteran Marcus Stoinis and Billy Stanlake last Sunday when they gave up 213 runs in 20 overs.

Coach David Hussey expressed his excitement to have Rauf back with the team. Hussey stated that Rauf’s addition to their fast-bowling stocks provides expertise, enthusiasm, and quality. He added that he is confident that he is sure Stars supporters will love seeing him back in the BBL|11 as a member of Team Green.

Rauf will make his debut against the Brisbane Heat on December 27. He will stay with the squad until the end of the tournament.

The Stars will encounter the Sydney Thunder at the MCG on Friday in their first home game of the season.