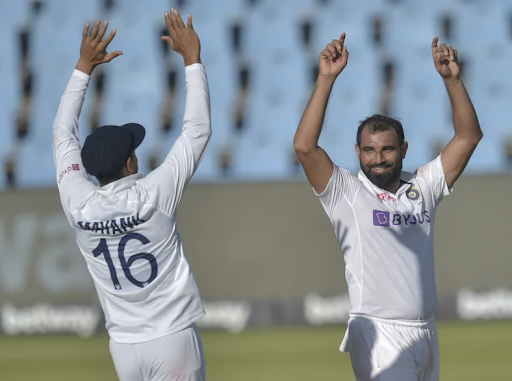 Mohammed Shami was the destroyer-in-chief on day 3 at Centurion, picking up a 5-wicket haul to help India to a 130-run lead in the first Test against South Africa. Shami completed his five-wicket haul by dismissing Kagiso Rabada, who also happened to be his 200th Test wicket. Shami achieved the accomplishment in his 55th Test match, making him India's third-fastest paceman to reach the milestone. The only other Indian pacers to accomplish the milestone in less Tests than Shami are Kapil Dev (50 Tests) and Javagal Srinath (54 Tests).

Early in the South African innings, the medium pacer seemed in terrific form, sending back Keegan Petersen and then bowling a gem of a delivery to clean bowl Aiden Markram after the lunch break on day 3.

With the South African middle and lower middle order putting up a fight, Shami was brought into the attack, and he reacted by dismissing Wiaan Mulder and then taking the key wicket of Temba Bavuma, South Africa's top scorer.

Before Shami came back into the attack and got rid of the opposition paceman, Rabada was playing a terrific hand and it appeared like he might lead South Africa above the 200-run mark.

India now has a fantastic basis to consolidate their position thanks to Shami's efforts.

It's worth noting that among all Indian pacers who have played 50 or more Test matches, Shami has the best average and strike rate.

After completing his 200th Test wicket in the first Test against South Africa at the SuperSport Park in Centurion, India pacer Mohammed Shami seemed to be sending on a message to someone with both arms up in the air and a big smile on his face.

The 31-year-old fast bowler stated that his 200th Test wicket was dedicated to his father. Shami’s father passed away in 2017. He added that his father deserves all of the credit for his accomplishment; Shami had a wonderful upbringing and he just wanted to give credit to his father who was always there for him.