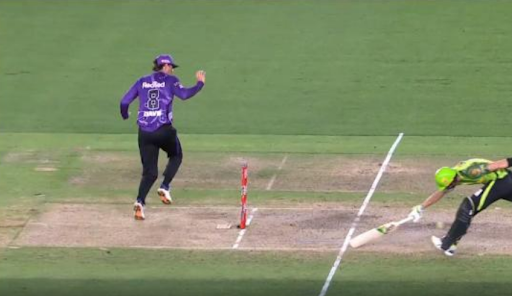 Thanks to some Glenn Maxwell brilliance, the Stars have comfortably chased down the Renegades' meagre total of 122.

The Stars chased down the score with 5.3 overs to spare after winning by six wickets.

The Australian T20 standout was a class above the rest, smashing 68 off 45 balls to remain undefeated at the end of the match.

The Stars' leg-spinning duo played well in the bowling innings, dismantling the Renegades.

The Stars' bowling innings were led by Adam Zampa (2-18) and Qais Ahmad (2-15), who superbly limited their cross-town rivals.

In the bowling inning, Maxwell grabbed the stage with some entertaining sledging directed against fellow Australian player Aaron Finch.

In their late surge towards the finals, the Stars will now jump the Renegades, Strikers, and Heat from the bottom of the table.

Marcus Stoinis and Nathan Coulter-Nile will be welcomed additions to the green team. The team is now in fifth place and has returned to the finals.

In their chase of the Renegades' short score, the Stars had lost two early wickets.

Josh Lalor has battled hard strongly after being bowled for a massive six and has taken the wicket of English batsman Joe Clarke.

After a wayward swipe to an excellent delivery, Zahir Khan came in and bowled Beau Webster after only two balls.

With Joe Burns and T20 International star Glenn Maxwell at the crease, the Stars are 2-48 after 5.2 overs.

The green and gold will be hopeful that the two veterans can carry them through to the finish line and complete a great comeback after the previous Melbourne derby on January 3.

They're currently cruising towards the Renegades' total, and captain Nic Maddinson's tactics have been criticised by Michael Vaughan.

As they continue their late charge into finals cricket, the Stars still have Stoinis and Coulter-Nile to return to their starting lineup.

The Renegades finished with a score of 7-122, with only two batters scoring in double figures.

At the top of the order, Jake Fraser-McGurk scored 32 from 39 deliveries in a sluggish innings. Meanwhile, Aaron Finch scored 45 from 44 balls at number five.

The Stars' spinners took the lead, bowling calmly and patiently.

With two wickets each, Adam Zampa and Qais Ahmad departed for under 20 runs, while Haris Rauf completed the innings strong with figures of 2-28 off his four overs.

Glenn Maxwell took it upon himself to delight the crowd with some entertaining sledging after the Renegades failed to ignite in the Melbourne derby.

After 14 overs, the Renegades have fallen apart and are now 5-79.

In the power surge, Qais Ahmad and Adam Zampa wove a web, with the Afghanistan leggie getting two wickets in his penultimate over to finish with 2-15 from four overs.

Despite a strike rate of less than 100, Aaron Finch is the dangerous man.

With rookie Jack Prestwidge matching the Australian T20 star, the Renegades will be hoping to take it deep and capitalise late in the innings.

Haris Rauf still has two overs to bowl, and the squad in red will be looking to neutralise his effects as the innings progresses.

With all of their big-name players set to fire, the Melbourne Stars will be looking to get the better of their cross-town rivals.

The Stars were without players during their last match on January 3, whereas the Renegades were generally unscathed by the recent Covid breakouts in the BBL.

Since returning to the team in red, Aaron Finch and Shaun Marsh have been outstanding, but Marcus Stoinis is poised to miss another game for the Stars due to a period of Covid isolation and resulting back pain.