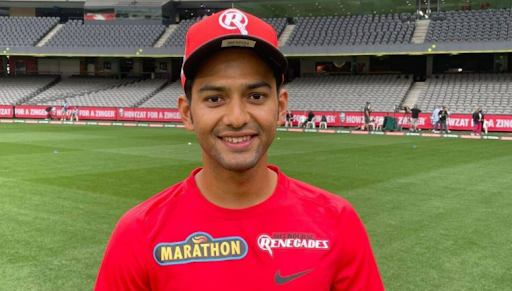 Unmukt Chand, a former U-19 World Cup captain, marked the first Indian male cricketer to participate in Australia's Big Bash League on Tuesday (BBL). Against the Hobart Hurricanes, the right-handed batter made his Melbourne Renegades debut.

Chand will be captaining Australia's limited-overs team, which will also include Shaun Marsh.

Last year, the 28-year-old ended his playing career in India and is now playing in other leagues throughout the world.

Chand, a former India A captain, has never represented India at the senior level but had been a part of three IPL franchises: Delhi Daredevils, Mumbai Indians, and Rajasthan Royals. He played 67 first-class matches during his domestic career, which spanned more than a decade.

Chand made his international debut at the 2012 ICC U-19 World Cup in Australia as a teenager. In the final, he was named player of the match after scoring an unbroken 111 against an Australian side that included Travis Head and Ashton Turner. Head and Turner are both now BBL players.

Chand relocated to Uttarakhand in pursuit of stability in 2019, but he left a year later following his dismissal due to poor performance. He subsequently left Indian cricket and relocated to the United States in quest of new chances.

On the other hand, in the most recent season of the Women's Big Bash League, eight Indians were selected. Melbourne Renegades have signed T20I skipper Harmanpreet Kaur and Jemimah Rodrigues, the second-highest run-scorer in the first edition of The Hundred.

Meanwhile, the Hobart Hurricanes have signed another player from overseas. The team has acquired 18-year-old wicketkeeper Richa Ghosh.

Poonam Yadav, a bowler recruited by Brisbane Heat, is the eighth and final foreign player.