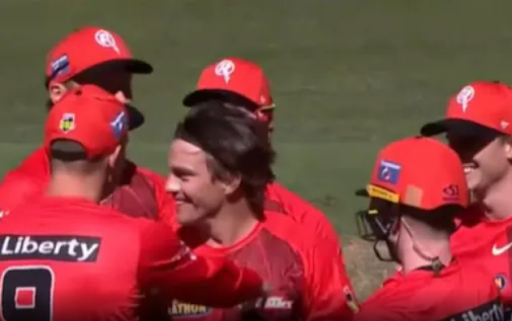 Boyce's outstanding performance spanned two overs of Thunder's innings, beginning with the dismissal of Thunder opener Alex Hales, who miscued the loft to long-off, on the final delivery of the seventh over.

In the ninth over, Boyce tricked Jason Sangha with flight on the opening delivery, stumping the right-hander while dancing down the pitch to strike the leggie for the big shot.

Alex Ross attempted a reverse sweep on the next ball as trapped lbw in front of stumps as Boyce completed his hat-trick. Daniel Sams played the ball all around from Boyce and was in front of leg-stump, which was good enough for the umpire to raise his finger in Boyce's favour, completing the double hat-trick. Thunder dropped from 80/0 to 85/4 in 8.3 overs thanks to Boyce's four wickets in a succession.

Boyce finished with stats of 5/15 in three overs after taking eight wickets in seven T20Is for Australia. Matthew Gilkes spooned a ball to cover in the 11th over to seal his five-wicket haul. Six overs later, Boyce got his hands on Usman Khawaja's on-drive from the non-end striker's to run-out Ben Cutting.

Renegades were able to keep the Thunder to 171 points because of Boyce's single-handed performance. Apart from Zahir Khan and Boyce, the other Renegades bowlers were accompanied by Hales and Usman Khawaja on their travel (77).

Boyce's 'Player of the Match' efforts weren't enough to help the Renegades win their final game of the season, as he was removed on the final ball with two runs needed to give Thunder a one-run triumph.