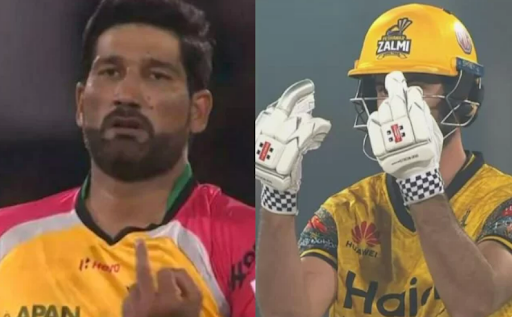 During the Pakistan Super League (PSL) 2022 match between Peshawar Zalmi and Quetta Gladiators, Ben Cutting made a double-finger gesture towards Sohail Tanvir, which may land him in a trouble situation. In the 19th over of the first innings, Cutting smacked the left-arm pacer for three consecutive sixes. While glancing at Tanvir, the Australian dasher also lifted both of his middle fingers.

Apparently, Tanvir didn't appreciate Cutting's conduct, and the two had a conversation in the middle, which looked to be resolved eventually. The drama, however, did not finish there. After taking a catch off Naseem Shah's bowling in the last over, the Pakistan pacer reverted the hostile two-finger signal to Cutting. Tanvir took a comfortable catch at backward point after the Australian star mistimed a pullback shot.

Tanvir did the identical move after catching the ball, further escalating the dispute. Tanvir and Cutting, on the other hand, have a long history of rivalry. Tanvir, who represented Guyana in the Caribbean Premier League, gave Cutting the notorious double-finger send-off after dismissing him. This was during the match between Guyana Amazon Warriors and St Kitts and Nevis Patriots back in 2018. Because the Australian hitter beat Tanvir this time, he didn't miss out on resolving the score. The duo's indecent acts, however, may result in a penalty from the match referee after the match. The event, like the 2018 show, sparked outrage on social media, with the duo receiving harsh criticism for their uncalled for conduct.

In the ongoing match at the Gaddafi Stadium in Lahore, Peshawar Zalmi won the toss and elected to bat. Zalmi appeared to be in serious trouble after losing two wickets in the space of six runs. The Zalmi, on the other hand, produced 185/7 in their allotted 20 overs thanks to half-centuries from Shoaib Malik and Hussain Talat. Cutting gave the team a late boost, scoring 36 runs on just 14 deliveries, including four sixes.